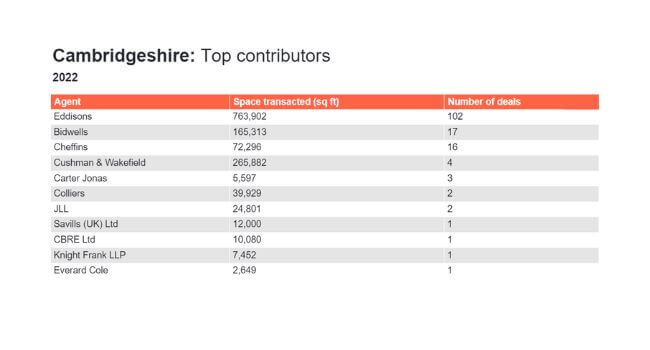 Eddisons has been identified as Cambridgeshire’s most active commercial agent, according to six-monthly deals competition results published this week by property research platform EG Radius.

The firm, which employs 360 people across the UK and has regional offices in Peterborough, Cambridge, Huntingdon and Bury St Edmunds, triumphed in the half-year ranking of Cambridgeshire agents, with 736,902 sq ft of space transacted and 102 deals completed. With six times the number of deals done by second-ranked firm Bidwells, Eddisons has topped the EG rankings for eight years consecutively.

The annual deals competition is open to all commercial agents completing property transactions in Cambridgeshire, Suffolk and Norfolk and is assessed on the volume of deals done for lettings and sales.

Eddisons also led the field in the ‘most active agents’ category of the awards, with six out of the top ten dealmakers in the East of England working for the firm. Matthew Hunt, Richard Jones, Julian Welch, Ben Green, Steve Mudd and Stephen Power all appeared in the top ten ranking, with each agent having completed between 19 and 12 deals in the first half of 2022.

Commenting on the agency’s ongoing success, Eddisons partner and head of agency Steve Hawkins, said: “Being in pole position in Estate Gazette’s East of England rankings really is testament to the hard work of all our team. As we continue to grow, Eddisons prides itself on being a national firm with local knowledge and expertise, gained from having people on the ground, and persistently going the extra mile for our clients.

“Clearly that has paid off and we are incredibly pleased to have our hard work on behalf of our clients recognised for the ninth year in succession.”

Eddisons instructed to let office and laboratory space near Cambridge

We’re proud to employ more than 350 talented individuals working across a multitude of disciplines.

Eddisons is rapidly growing; emphasised by our nationwide office network which is now 25-strong.

We’re ready to take your call and can quickly pass you through to the right department.

This website uses cookies to improve your experience while you navigate through the website. Out of these cookies, the cookies that are categorized as necessary are stored on your browser as they are essential for the working of basic functionalities of the website. We also use third-party cookies that help us analyze and understand how you use this website. These cookies will be stored in your browser only with your consent. You also have the option to opt-out of these cookies. But opting out of some of these cookies may have an effect on your browsing experience.
Necessary Always Enabled
Necessary cookies are absolutely essential for the website to function properly. This category only includes cookies that ensures basic functionalities and security features of the website. These cookies do not store any personal information.
Non-necessary
Any cookies that may not be particularly necessary for the website to function and is used specifically to collect user personal data via analytics, ads, other embedded contents are termed as non-necessary cookies. It is mandatory to procure user consent prior to running these cookies on your website.
SAVE & ACCEPT